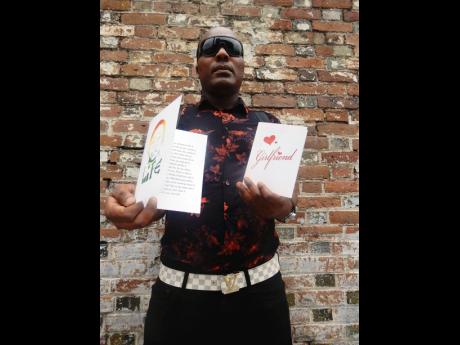 Dwayne Daley shows the two cards he has out right now, 'Life' (left) and 'Gifted'. 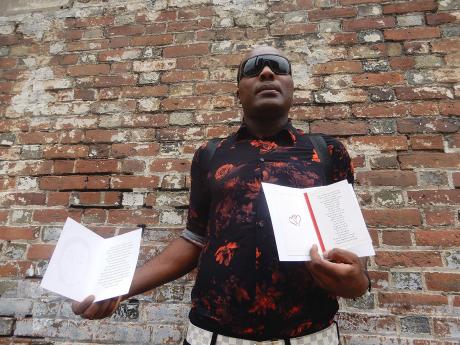 Gift card maker Dwayne Daley, who is also a poet, takes some poems from an E-book he did years ago.
1
2

Describing himself has having a ''heart for the arts'', Dwayne 'Black Offspring' Daley said he has fused his various talents to produce creative gift cards.

A writer, poet and recording artiste, Daley told THE STAR that he is just using lemons that life has thrown at him to make lemonade, in the form of the decorated designs on which his witty words lay.

"This thing started from early this year, when we sampled the market in February when it was Valentine's season but it never really tek off as how we did expect. But we still kinda structure it a bit," Daley said.

Noting that he has always been a lover of the arts, Daley said he released an e-book a few years ago, from which he still pulls from to pen the poems which are printed on his cards

With two pieces, titled Life and Girlfriend currently on the market, Daley said persons are applauding him for his creations.

"On the ground people love it, suh I am trying to go global with it. The rave reviews are real, and some want it here, some want it there," he told THE STAR.

Citing that his inspiration comes naturally, he said he just embraces the talents that he has received from the Almighty.

"As a child, when yuh used to go to Woolworth (retail store) and see di cards dem, yuh have a vision in life. And in this 21st century, yu just haffi be productive in your own craft and invest in yuh talent," said Daley, who has been writing for nine years.

"I have been through a few jobs, and I did an e-book; and I'm always thinking about the next thing in the arts because I am affiliated with the Poetry Society (which meets) at Edna Manley College. I am always putting a lot of priority in the arts," he said.

Selling his cards for between J$350 and J$400, he said they would make a great gift for any occasion.

"The writing guh fi all seasons. It is a natural writing weh yu can compliment your significant others, like yuh wife or yuh girlfriend," he told THE STAR.

With most of his poems already edited, he plans to release more samples in the near future.

Other Jobs to Go Stories