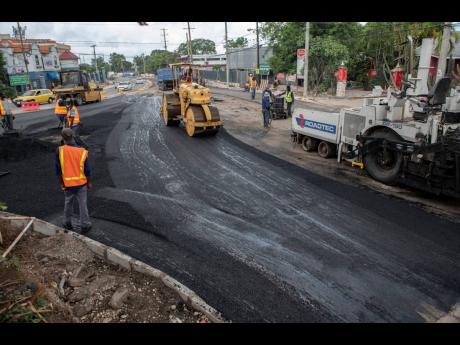 Notwithstanding the minefield of manhole covers, the newly minted Constant Spring Road from the Dunrobin Avenue intersection up to Manor Park looks nice.

The two lanes on either side of the concrete median should make traffic flow a lot more smoothly, assuming the madmen driving buses do not mess up the whole thing.

Constant Spring Road was a mess. It was bumpy, narrow, and not befitting of being one of the main arteries in the city.

However, now that it is nearing completion, I am concerned about the timing of the opening of certain sectors of the roadway. There is no map to show what the final traffic flow will look like.

At the former, there is no signage or filter lights. Therefore, motorists turning right from Constant Spring Road on to Central Avenue literally risk death from oncoming traffic once the lights turn green.

Nobody has said anything about whether that turn will still be allowed, so what was once the norm prior to the upgrading now becomes a potential hazard.

Now that they have opened the section of the road from West Avenue heading up towards Mary Brown’s Corner, and the section from Central Avenue going up to the West Avenue intersection, any motorist seeking to turn right on to Constant Spring Road is literally putting their life at risk, as there are now no traffic signals in place.

How does it make sense to open those sections of the road without first installing the traffic signals?

I will not even bother to mention that often-used right turn from the Grant’s Pen Gully on to Constant Spring Road that is now no longer legal.

People are creatures of habit and without warning, instinct can take over at intersections like that and before you know it an accident can occur.

The National Works Agency needs to do better concerning their public education plans.

Leaving confused motorists without the relevant information can lead to disaster and the unnecessary loss of life.