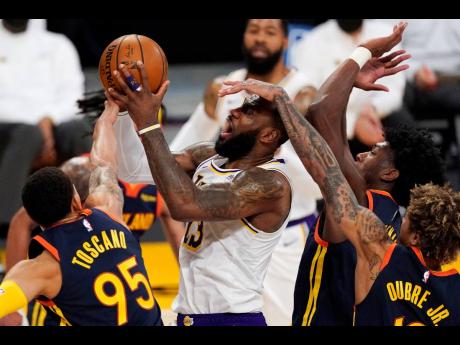 The Los Angeles Lakers blew a 14-point, fourth-quarter lead in their first meeting against the Golden State Warriors. They were determined not to let that happen on Sunday night.

LeBron James scored 19 points in his 1,300th regular season appearance as the Lakers routed the Warriors 117-91. He was one of six Los Angeles players to score in double figures in a game that was never in doubt.

The Lakers were up 20 at the end of the first quarter and had a 73-44 lead at halftime.

"Our starters played terrific," Lakers coach Frank Vogel said. "They had a mindset to make sure they took care of business against a team that stole one from us the last time."

Forward Markieff Morris was a little more direct about the revenge factor.

"We remember getting up big last time and then coming back," he said. "We wanted to make our mark early and just keep our foot on their neck throughout the game."

Vogel said the best thing to come out of the game was that James played a season-low 24 minutes and sat during the fourth quarter.

Kyle Kuzma had 12 points and 11 rebounds for his eighth double-double this season, while Morris and Alex Caruso each scored a season-high 13 points.

The defending NBA champions had dropped five of six since Anthony Davis suffered a right calf strain on February 14, but have won their last two.