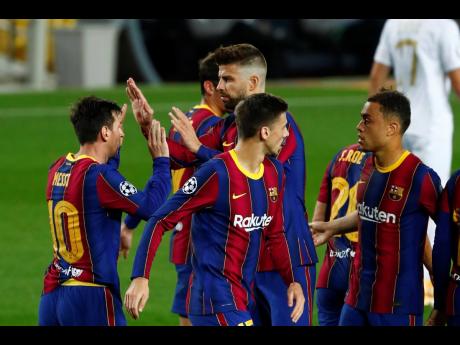 Barcelona players celebrate the opening goal of their team during the Champions League Group G match between FC Barcelona and Ferencvaros at the Camp Nou stadium in Barcelona, Spain, yesterday.

Lionel Messi opened the scoring to lead Barcelona to a 5-1 win over Hungarian club Ferencvaros yesterday in its first Champions League match since the embarrassing 8-2 loss to Bayern Munich last season.

In the other group match, Juventus won 2-0 at Dynamo Kyiv with a pair of goals by striker Alvaro Morata.

Barcelona, trying to win their first Champions League title since 2015, was trounced by Bayern in August during last season's quarter-finals. The loss capped the Catalan club's first season without a title since 2007-08. The club has been mired in crisis since then, with Messi being forced to stay despite wanting to leave, and with former player Ronald Koeman taking over the coaching job with the task of revamping the squad.

Messi opened the scoring by converting a 27th-minute penalty kick after being brought down by a defender inside the area. It was his second goal of the season in all competitions. It extended his run with at least a goal in the Champions League to 16 consecutive seasons. He has a total 116 goals in the top European club competition.

The 17-year-old Fati added to the lead with a nice touch from close range in the 42nd after a well-placed pass by Frenkie de Jong, then set up Coutinho's goal with a neat back-flick pass in the 52nd. Coutinho was on a loan with Bayern last season and scored twice for the German club in the 8-2 win over Barcelona in Lisbon.

Substitute Pedri scored from close range in the 82nd in his Champions League debut, and Dembele came off the bench to seal the scoring in the 89th for his first goal with Barcelona in more than a year.