Veteran US bobsledder to represent Jamaica 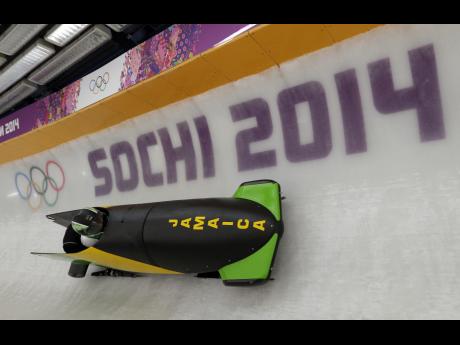 The JAM-1 sled from Jamaica, takes a turn during a training run for the men's two-man bobsled at the 2014 Winter Olympics, on Thursday, February 6, 2014, in Krasnaya Polyana, Russia. (AP Photo)

Jazmine Fenlator, a seven-year veteran who represented the United States at the 2014 Winter Olympics is hoping to become a member of Jamaica's first ever female bobsled team to the Winter Olympics in Korea in 2018.

Harris, a member of the original bobsled team that competed in Calgary Canada in 1988, said the federation plans to send at least one female bobsled team to the games set for PyeongChang in just over two years' time and Fenlator's inclusion boosts those chances.

"We are really excited about the prospect. We had been talking to her for quite awhile about the possibility of jumping ship and coming to represent the black, green and gold and she has finally decided to do that," he said.

"She is in the process of finalising her citizenship."

Fenlator, whose father is Jamaican but was born in the USA, was granted permission to be released from USA Bobsled & Skeleton earlier this month. It was the first of three steps required by the International Bobsleigh Federation before she is permitted to compete for Jamaica. She now needs to prove her Jamaican citizenship and needs the Jamaica Bobsleigh Federation to request permission to add her to its roster, which based on Harris' comments is a mere formality.

The JBSF recently held trials in Kingston in mid-September during which a number of potential candidates were selected to start training in the United States soon.

The veteran, who piloted the USA-3 sled at the Sochi 2014 Games, said her goal was not to leave the US programme, but rather to increase the diversity of the sport and to help Jamaica.