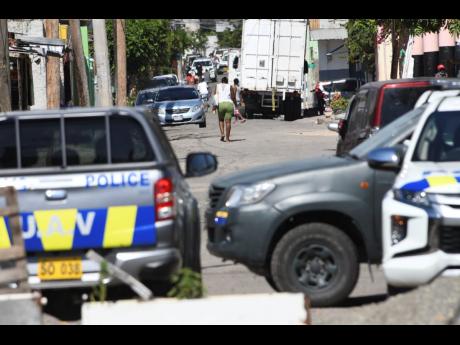 Security forces in the Parade Gardens community in Central Kingston.

The House of Representatives on Tuesday approved a further 60-day extension of the zones of special operations (ZOSOs) in seven areas across Jamaica.

Deputy Prime Minister and Minister of National Security Dr Horace Chang informed that as of December 4, for the period prior to and during the declaration of the respective ZOSOs, areas under the ZOSO continue to record reductions in all major crimes. He also provided a brief update on some of the activities under way in those communities.

Chang pointed out that given the advanced development status of the Mount Salem ZOSO, activities are principally around consolidating and completing activities towards the sustainable development of the community.

"So far, the Social Intervention Committee (SIC) has managed the implementation of over $300 million in investment in Mount Salem," Chang said.

He noted that the priorities on the work plan are all implemented, and only a handful of residual activities remain for the community, adding that the committee will continue to provide oversight until the interventions are complete.

In Denham Town, capacity-building of the Community Development Committee resulted in investments of more than $20 million being directly managed at the community level.

Also, through the ZOSO, Greenwich Town has had the single largest period of public investments. The SIC continues to monitor the implementation of key social investments within the community. For August Town, Chang said the community continues to show promising results.

"The Social Intervention Committee continues to engage and provide critical guidance to the sustainable buildout of interventions within the area. With over $200 million committed, to date, the zone remains on track and will achieve its intended objective of a safer and better community," he added.

Meanwhile, the Norwood ZOSO is earmarked for significant buildout of much-needed infrastructure, including supporting the rehabilitation of road and water supply.

The minister said in the interim, several short-term initiatives are being executed. Currently, there are approximately $300 million in approved projects to be implemented in the community. These investments are projected to be implemented over the next 12 to 24 months.

"Notwithstanding this, there have been selected interventions to support the community in the interim," Chang said.