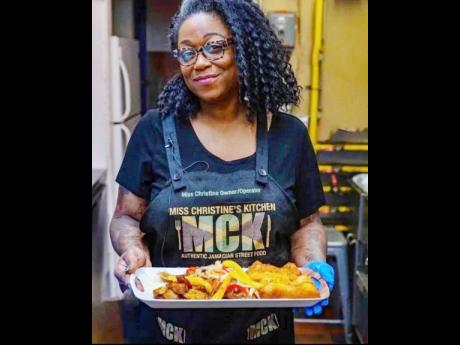 Christine Pattison has come a far way from her days growing up in Southside, Kingston. The 51-year-old says it was the determination that led to her having a successful Jamaican restaurant in Winnipeg, Canada.

"I came from South. I grew up poor with nothing. My mom was an alcoholic so we basically got teased all our life. People would take advantage of us. My way of making people befriend me and like me down in South was to go to the Coronation Market between the ages of eight and 10, and go and beg for food. I would beg for food, I would come back home and I'd cook the food and give it to the people in the yard," Pattison said.

After getting pregnant at the tender age of 13, Pattison did not allow that setback to retard her progress. Instead, she stuck to the man who got her pregnant, a Caucasian who was working on a ship, who eventually took her to Canada in 1989.

"Swan River Manitoba, that's the first place I landed when I came to Canada. My husband was an electrician, he was always gone so I was stuck at home with the kids and in order to befriend the white folks that's the same thing I did again. I started cooking in the little small town because I was the only black person in a town of 4,000 people at the time," Pattison said.

The mother of three said that she always knew food was her way out, but never thought that her husband losing his job would have been the catalyst for the launch of her restaurant.

"About four years ago, our home went into foreclosure because my husband wasn't working, and I myself wasn't working, so we were behind on the mortgage. But I said to him, I think I should start cooking and selling food from the house," Pattison said.

She began preparing and selling food from her house but the authorities shut down the operations. Instead of folding her arms, Pattison found a commercial location and launched her business. Miss Christine's Kitchen was born.

Pattison now shares the authentic Jamaican recipes she had used to survive, including what she describes as the best-selling oxtail, with people all over.

"I just wanted to share stories with the young girls to say that it's not where they're coming from, it's where they're going," she told THE WEEKEND STAR.

"I just wanna let these young girls know it doesn't matter how long it takes, as long as you're making an effort to make your life better. Food is what carry me through my entire life. If it wasn't for food I wouldn't be living in that nice home that I have, driving my nice jeep and sharing my authentic Jamaican food with a bunch of wonderful folks," she said.