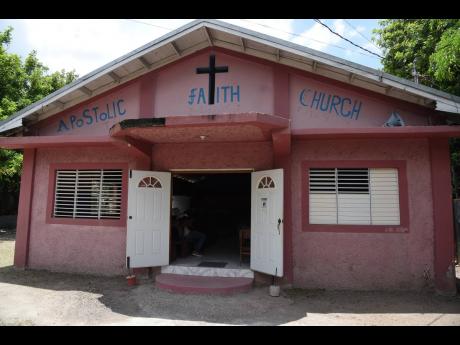 "God is vexed with the nation and sin has reached his nostrils." These were the words of Lolita Fagan, an evangelist, who led a small group of worshippers in a feverish prayer session at the Apostolic Faith Church of God at William's Lane in Spanish Town, St Catherine on Wednesday.

A state of public emergency (SOE) was declared in the parish on Friday, June 17, as the government moved to cauterise the bloodletting brought on by flare-ups of violence.

Fagan told THE WEEKEND STAR that neither the government nor the police can remedy the crime situation.

"Only God can rescue this island from the monster that we call crime. The devil is like a roaring lion, entering to the hearts of men and letting them do the wrong thing. So many things are happening, but we have a refuge, we have a God that never fails. We are a nation in peril, the government and the police can do so much and no more, but we cannot stop calling on his name," said Fagan.

She argued that other tragic events happening across the country, such as Tuesday's quintuple murder in New Road, Clarendon, is reflective of a country that has lost sight of God.

"My God! I don't know weh dem get dem heart deh from. Dem just a kill, kill, kill so. Yuh can hide from man, but yuh cyah hide from God. He knows everything, and what is happening in Jamaica only shows how lost our souls are. We cannot depend on the police and soldier them, they are also humans. It's only God that will carry us through," the evengelist said.