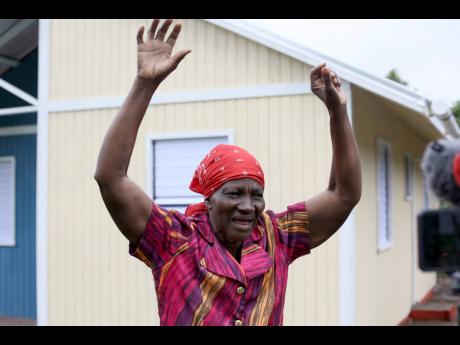 Irene Morgan of Corn Hill, Smithville in Clarendon, gives thanks for her two-bedroom house provided by Food For The Poor. 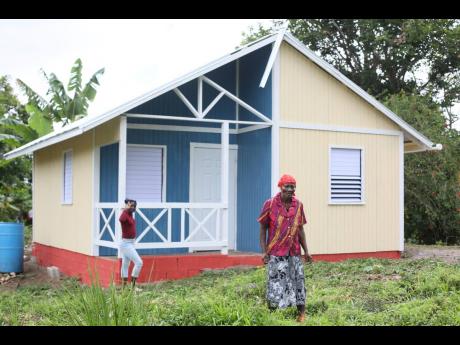 Morgan stands in front of her new home.
1
2

In February, senior citizen Irene Morgan of Corn Hill in Smithville, Clarendon, was in tears as she told the news team about living in a run-down house with no proper toilet facilities.

But standing in front of her newly built two-bedroom house, courtesy of Yohan Blake's YB Afraid Foundation in partnership with Food For The Poor (FFTP), Morgan could not control her emotions.

"A caan begin fi tell you how mi feel. This is like mi lift up offa di earth wid di feelings trust mi. Cause mi never know sey mi woulda deh yah suh and a look pon a house like that," she gushed.

The new home comes equipped with a kitchen, living room and bathroom.

"You see from di day unno come, a different feeling until dis hour. Is a different feeling and mi haffi tenk God and Mr Mundle," she shared, referring to the councillor for the Frankfield division of the Clarendon Municipal Corporation, Clive Mundle. Expressing thanks to FFTP, YB Afraid Foundation, and all those who reached out after her story was published on February 19, she acknowledged how far she is coming from. Mundle said that he was overjoyed.

"The Member of Parliament [for Clarendon North West Phillip Henriques] and I have collaborated because everything I do I make him aware and he made his commitment. I am pretty happy today that we are on the same spot and we are all overjoyed. Because indeed, coming from that house to this house, it is truly a blessing thanking God we are happy," he stated.

Henriques said he was exploring other options in case things hadn't worked out. "But we are very grateful and happy for what the donors gave to her," he said.

Timothy Spencer, Blake's manager, said the foundation tries to do a FFTP home every year. He said the recommendation for the house was made by Marsha Burrell Rose, development and marketing manager at FFTP.

"We just rely on Marsha. Her judgement is fantastic in that she recommends suitable candidates that we help, and that's what we did this time," he said.