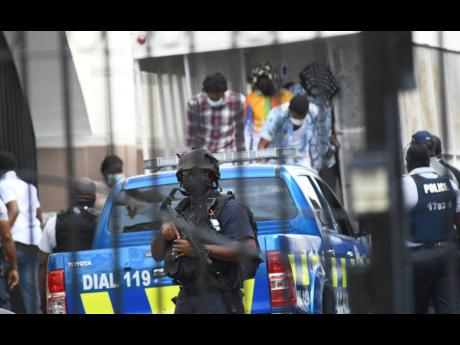 Police escort alleged members of the Clansman gang into court on the first day of their trial in the Home Circuit Court in downtown Kingston.

The attorney for alleged gang leader Andre Bryan yesterday appeared to have called for the Government to allocate more money to pay legal aid lawyers engaged in the trial.

Bryan, who is among the 33 alleged members of the Clansman gang now before the Home Circuit Court, is represented by senior lawyer Lloyd McFarlane, who is assisted by Nicholas Kellyman and Cheryl Richards.

"I have been asked to indicate that although we are here, we are prepared to proceed, which is why we are here, but there is something that is not truly satisfactory," McFarlane said yesterday, as the trial got on the way.

"It is not within your Lordship's jurisdiction, so to speak, but this is where I must raise it again so that persons who may hear. I know the Registrar has been trying, but I raise it just to bounce it off your Lordship, so to speak, so that persons may understand that we have months ahead of us, it will be affecting our practices, and we still believe that there should be some further review in terms of what is being offered to us," the senior lawyer added.

In June, taxpayers were called to foot a bill of nearly $66 million in legal fees for 34 persons who were locked up by the State under the anti-gang law. The payments were made to attorneys-at-law who provided legal-aid services in the Uchence Wilson and Carlington Godfrey gang trials.

The average fee paid to the 28 attorneys-at-law for the Uchence Wilson trial, which ran intermittently for 19 months, was just under $2 million.

The 33 defendants before the court are alleged to be members of the Black Man faction of the Clansman gang. The prosecution, yesterday, said that it will be calling 42 witnesses, two of whom have been described as self-confessed members of the gang. They will give their evidence from a remote relocation via video link.

Bryan and his alleged accomplices have pleaded not guilty to being part of a criminal organisation.