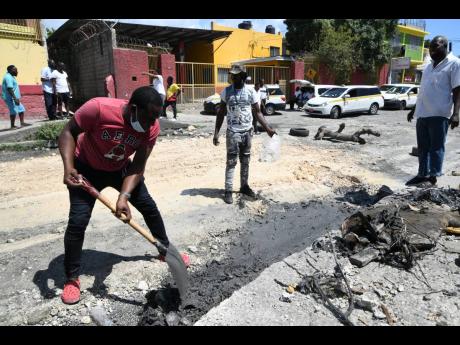 Owen Thomas (left), taxi operator, does his part to fix the roadway. 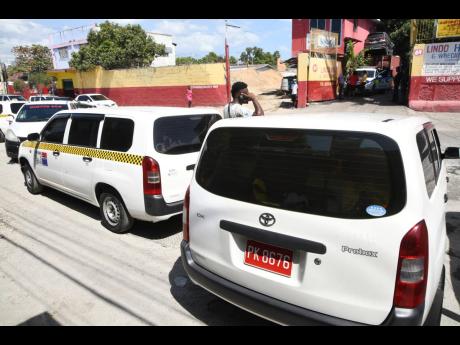 Taxi operators parked their vehicles to demonstrate the condition of a section of Waltham Park Road. But aided by the police, they attempted to rehabilitate the roadway and clear a nearby gully. 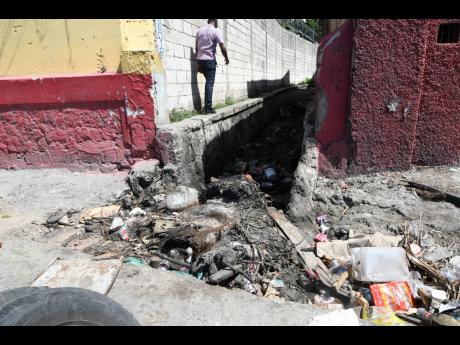 Contents of this blocked gully have spilled over on to the roadway, adding to the already difficult journey for motorists.
1
2
3

Taxi operators who ply the Waltham Park to downtown Kingston route and cops from Hunts Bay Police Station joined forces yesterday to repair a damaged roadway in a section of Waltham Park Road.

Huge potholes filled with water and rubbish that flowed over from a nearby blocked gully were obstructing movement on the road. A police sergeant, who was among the group overseeing the work, stated that they decided to join forces with the taxi operators as they, too, are affected by the bad road.

"We travel along this route daily and we know how dangerous it us so we just unite to get it done. We made a link with a couple of persons and they offered their assistance by providing materials and a tractor which we are really grateful for, so we are here cleaning the gully and repairing the road," he said.

The taxi men had earlier suspended their services and blocked the affected section of the road with used tyres. Wayne Brown said the road has been in a bad state since last November's heavy rains.

"The people dem in the community throw tings in the gully and when it block up, the water from dem waste and rubbish block up the place. The water rose to the road level and settle and create a big 'drum hole' because a nuh pothole dem here. A from November when the last big rain fall it stay suh," Brown said.

The taxi men said in addition to constantly replacing vehicle parts, the bad road has also caused accidents and a decline in their income.

"A just the other day mi see a bicycle man drop in a one a the hole dem and car man lick up. The road full a traffic and people reach a work late. If you could a make $1,000 a day time, now a $300 we a make now because a the length of time it take to travel. Right now the way the hole dem big, people soon can catch fish it. We couldn't let it stay suh man," Jevaughn Fisher said.

THE STAR team travelled along the gully wall and was greeted with the unpleasant sight of three burning dog carcasses. A small business owner said this is nothing unusual.

"Whenever the rain fall, we just have to close our business because sometimes when is not human faeces, it's a dead dog or cat yuh see floating up. The stench is awful and right now mi worried about all the diseases whe this can give because as it touch evenings, the mosquito dem attack," she said.

The taxi operators lauded the police officers for their efforts.

"This is one of the first times that the police have stood beside us as taxi operators because usually they would be chasing us down. We are really happy that they support us on this cause and did not chase us away when we decided to block the road. It shows us that unity is strength," one operator said.