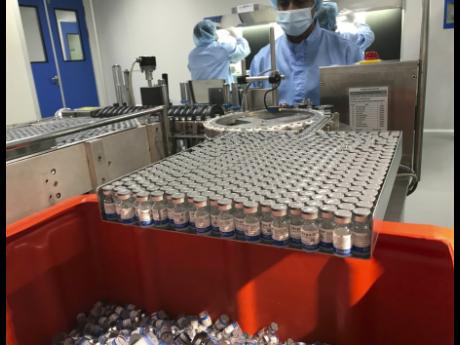 Production personnel perform the labelling operation of inspected vaccine vials inside the Incepta plant on the outskirts of Dhaka in Bangladesh Saturday Feb. 13, 2021. (AP Photo/Al-emrun Garjon)

PARIS (AP) — In an industrial neighborhood on the outskirts of Bangladesh’s largest city lies a factory with gleaming new equipment imported from Germany, its immaculate hallways lined with hermetically sealed rooms. It is operating at just a quarter of its capacity.

It is one of three factories that The Associated Press found on three continents whose owners say they could start producing hundreds of millions of COVID-19 vaccines on short notice if only they had the blueprints and technical know-how.

But that knowledge belongs to the large pharmaceutical companies who produce the first three vaccines authorised by countries including Britain, the European Union and the U.S. — Pfizer, Moderna and AstraZeneca.

The factories are all still awaiting responses.

Across Africa and Southeast Asia, governments and aid groups, as well as the World Health Organization, are calling on pharmaceutical companies to share their patent information more broadly to meet a yawning global shortfall in a pandemic that already has claimed over 2.5 million lives.

Pharmaceutical companies that took taxpayer money from the U.S. or Europe to develop inoculations at unprecedented speed say they are negotiating contracts and exclusive licensing deals with producers on a case-by-case basis because they need to protect their intellectual property and ensure safety.

Critics say this piecemeal approach is just too slow at a time of urgent need to stop the virus before it mutates into even deadlier forms.

WHO called for vaccine manufacturers to share their know-how to “dramatically increase the global supply.”

All over the world, the supply of coronavirus vaccines is falling far short of demand, and the limited amount available is going to rich countries.

Nearly 80% of the vaccines so far have been administered in just 10 countries, according to WHO.

More than 210 countries and territories with a collective population of 2.5 billion hadn’t received a single shot as of last week.

The deal-by-deal approach also means that some poorer countries end up paying more for the same vaccine than richer countries.

South Africa, Mexico, Brazil and Uganda all pay different amounts per dose for the AstraZeneca vaccine — more than governments in the European Union, according to studies and publicly available documents.

AstraZeneca said the price of the vaccine will differ depending on factors such as production costs, where the shots are made and how much countries order.

Governments and health experts offer two potential solutions to the vaccine shortage: One, supported by WHO, is a patent pool modeled after a platform set up for HIV, tuberculosis and hepatitis treatments for voluntary sharing of technology, intellectual property and data.

But not a single company has offered to share its data or transfer the necessary technology.

The other, a proposal to suspend intellectual property rights during the pandemic, has been blocked in the World Trade Organization by the United States and Europe, home to the companies responsible for creating the coronavirus vaccines.

That drive has the support of at least 119 countries among the WTO’s 164 member states, and the African Union, but is adamantly opposed by vaccine makers.

Pharmaceutical companies say instead of lifting IP restrictions, rich countries should simply give more of the vaccines they have to poorer countries through COVAX, the public-private initiative WHO helped create for equitable vaccine distribution.