Jamaicans arrested in Cayman in connection with major drug bust 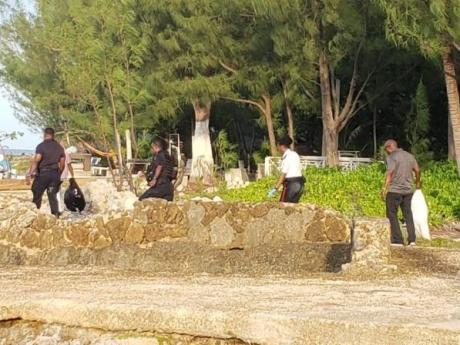 Police personnel in the Cayman Islands carrying bags of ganja recovered along the coastline of North West Point on September 24, 2020. Three Jamaicans were charged in relation to the seizure.

Three Jamaican men have been charged in the Cayman Islands in connection with a major drug bust.

The men, ages 56, 44, and 31 were charged with importation of ganja, and illegal landing last Friday, in relation to the seizure of 980lbs of ganja by police along the West Bay coastline.

The 44-year-old was also charged with contravention of a deportation order.

They are expected to appear in court today.

Reports from the Royal Cayman Islands Police Service are that officers from the air operations unit were carrying out an aerial patrol early Thursday, September 24 when they came across a vessel in the waters off North West Point Road in West Bay.

According to the police, the occupants of the vessel, after seeing the police helicopter, were observed throwing items from the vessel into the water.

The Cayman Islands Coast Guard was informed of their location, responded and intercepted the vessel.

All three men on board were arrested and charged.

Police say a total of 42 packages were recovered during the search of the area.