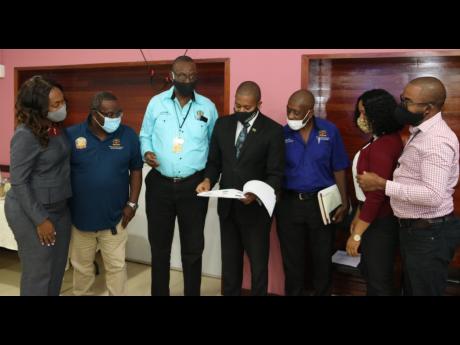 The Ministry of Agriculture and Fisheries, through the Jamaica Dairy Development Board (JDDB), has targeted seven agricultural education institutions for increased milk production.

This disclosure was made at a meeting with the JDDB at the ministry's offices at Hope Gardens in Kingston last Thursday, where Agriculture minister, Floyd Green, urged the board to use the initiative to attract as many young people as possible to the dairy industry.

“When you set up those first-rate dairy farms in those schools, you will work with them to get other school students in and around the area to visit the farms and talk to them about the business so it will be able to spark a fire in them in relation to dairy production,” he said.

The institutions being targeted are the College of Agriculture, Science and Education in Portland, Ebony Park HEART Academy in Clarendon, Dinthill Technical High in St. Catherine, Knockalva Polytechnic College in Hanover, the Northern Caribbean University in Mandeville and the Munro College and Sydney Pagon Science, Technology, Engineering and Mathematics (STEM) Academy in St. Elizabeth.

The Minister commended the JDDB for the work done around silage production and encouraged them to further expand its production to treat with times of drought.

Meanwhile, Acting Chief Executive Officer of the JDDB, Everton Parkes, in accepting the Minister’s charge, said the plan will be to provide the schools with fodder banks and additional pastures and animals for milking.

“This will allow for more animals in the industry for milking, which will lead to increased production. We are also linking students with technology so that they can start to think of creative ways to increase the production process. This is an investment in the future,” he said.