One-Minute Reads ... News from across Jamaica 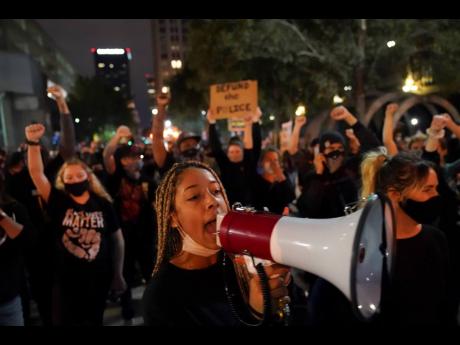 Protesters march on Thursday, in Louisville, Kentucky, USA. Authorities pleaded for calm while activists vowed to fight on in the state’s largest city, where a gunman wounded two police officers during protests following the decision not to charge officers for killing Breonna Taylor.

The court has ordered that four siblings be admitted into State care after one of them, a three-year-old boy, was videoed smoking a cigarette and purportedly drinking alcohol while being egged on by adults.

The police located the mother and children, the oldest being eight years old, in Old Harbour, on Thursday morning.

Children's Advocate Diahann Gordon Harrison referred to the ruling as a "temporary order until the court has more information".

"It is an ongoing matter in terms of doing the necessary checks and interviews and so on. We have promising information," she said.

Gordon Harrison said that health checks would be conducted on the children as part of a routine response. The police had issued an appeal for information on the child's and parents' whereabouts after the viral video sparked public outrage.

The deceased is 23-year-old Junior Charlton of Love Lane, Kingston. Reports are that about 1:10 p.m., Charlton and another man were walking along Love Lane when a car approached them in the vicinity of Beeston Street. The accused and another man, armed with guns, then opened fire on the two.

Allen was subsequently arrested and charged with murder, shooting with intent, and illegal possession of firearm on Wednesday, September 23. Investigations are ongoing to find the other assailant involved in the incident.

Detectives in Westmoreland arrested and charged 23-year-old Frisco Lewis of Petersfield in the parish for the murder of a man in August 2018.

The deceased is 36-year-old Woodsaw Noble of Hertford, also in Westmoreland. Reports are that Noble was at home when he was attacked by Lewis, who shot him several times.

The police were summoned and Noble was taken to hospital where he was pronounced dead. On Saturday, September 19, lawmen carried out an operation in Hertford, and Lewis was apprehended. He was subsequently charged with murder. His court date is yet to be determined.

One man has been arrested and charged with two offences following an incident along Fifth Street, Kingston 12, last Tuesday.

Charged with shooting with intent and illegal possession of firearm and ammunition is 22-year-old Nakata Leslie, otherwise called 'Frilly', of Second Street, Kingston 12.

Reports from the Kingston West police are that about 3:10 p.m., the complainants were standing along the road way when the accused and three other men, armed with guns, fired several shots at them; the complainants were not injured. A report was made to the police and Leslie was apprehended and charged on Wednesday, September 23.

Two employees were arrested and charged by police on Sunday for breaches of the curfew order. McKenzie said the establishment has been ordered closed for 14 days.

He said, during this period, the operators will be required to obtain permits, including certification from the Jamaica Fire Brigade. The authorities are also moving to prosecute the operators of several nightclubs which have been operating under the guise of restaurants and lounges.