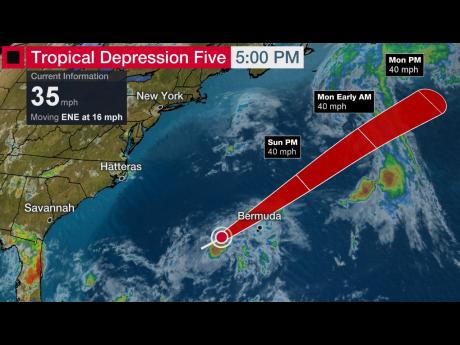 Tropical Depression 5 was about 240 miles west-southwest of the island at noon local time on Saturday, packing maximum winds of 34 miles per hour and stronger gusts. It was travelling in an east-northeast direction towards Bermuda and the Miami-based National Hurricane Centre (NHC) said it could become a tropical storm later in the day.

The Bermuda Weather Service said in its forecast that “Tropical Depression 5 has now formed and is projected to move north of Bermuda tonight as a marginal tropical storm.

“This may briefly bring gale-force winds, showers and the potential for thunderstorms through late tonight and early Sunday morning.”

The storm’s closest point of approach to the island is forecast to be at 2.00 am (local time) on Sunday when it is expected to be 48 miles to the northwest.

If Edouard forms this weekend it would be the earliest fifth named storm on record since the satellite era of the 1960s and 1970s, observers said.

The remnants of Tropical Storm Arthur passed over the island in May before the Atlantic hurricane season officially started on June 1. It ends on November 30.