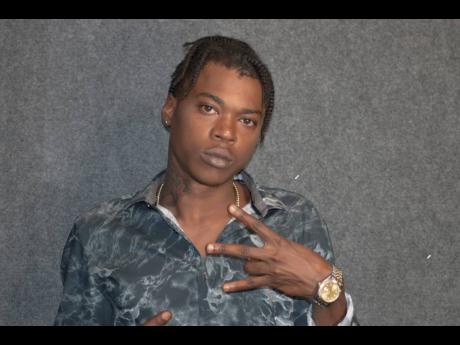 Recording artiste Skillibeng continues to disprove criticisms made when he first emerged that the buzz about his career would soon die down.

Speaking to New York's L3 Magazine at a private event held last Friday to celebrate the release of his debut album, Skillibeng said "Some people thought I would be a one-hit wonder because of how mi start, but music is my passion. Dem nuh see nuttin' yet."

Which the controversial dancehall entertainer rightly expressed, noting that the long-awaited Crocodile Teeth album which was launched as an LP and NFT (non-fungible token, a unique digital token that can represent real-world physical items such as art and music). His overall impression of NFTs, he told THE STAR, was "a new way, new currency." He said that fans have the option to purchase both his album and the NFT separately.

But NFTs are not just a new means of income for recording artiste like him. They are becoming popular among the younger generation of music consumers and contributing to the expansion of brands, Skillibeng explained.

"I can't tell another dancehall artiste what to do but if he or she wants to invest in NFTs, they should. It does not mean they necessarily have to do exactly what I do, but they should get involved in business," he said. "With branding [it helps] and is very important for our careers as we are popularly known."

Each of the 12 songs has 41,600 pieces of collectible art at US$2 each and also a deluxe version which commemorates the year of its release with 2021 limited edition pieces being sold at a higher cost. Purchases can be made using a debit-credit card and cryptocurrency.

Despite the statistics reported by OpenSea, a digital marketplace for buying, selling, and trading NFTs, which showed low volumes in terms of purchases, Skillibeng said "The feedback has been great especially on an international basis. The feeling ... it's a great feeling as we are still promoting the album this very minute."

The songs have been endorsed by artistes like Drake, who Skillibeng was successful in dethroning from the number one spot on iTunes charts. Skillibeng says he believes in the potential of dancehall to exceed where it is but more so the power of the 'EastSyde' group, which is coming to claim its position on the world stage.