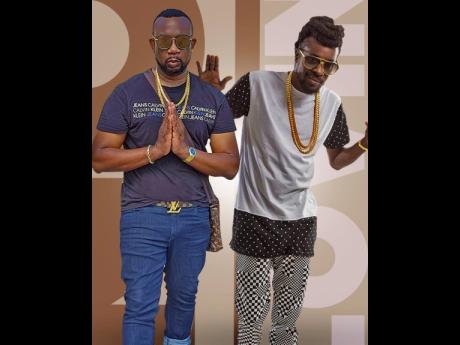 Medical doctor and recording artiste Shaka Pow is today overjoyed at the opportunity to work with 'Di Doctor' Beenie Man on a new track.

The single, No Lovin, is centred around love with both 'doctors' trying to offer through music, a 'cure' for toxic relationships.

" No Lovin is a Jamaican classic. It talks about the flaws men have that contribute to them getting 'no lovin'. Man must know how fi treat woman and that's the message this song is sending. A lot of man still nah get no loving and most times a dem own fault," he said. Shaka Pow told THE WEEKEND STAR that working with Beenie Man left him speechless, especially since he feels he held his own against the King of Dancehall. "Being able to be on a track with one of dancehall's greatest of all time and actually hold my own was something remarkable. It was an equal collaboration where both of us were pulling our weight and it validates that Shaka Pow is a bad deejay from a long time," he shared.

The entertainer also indicated that he hopes the song will mean even more exposure for him as an artiste.

"I want it to say 'Shaka Pow is here and here to stay'. I will continue to do quality music and this is just one of many other collaborations to come. I am here to add to the culture especially now through my Outfytt Records label. We are going to take this song worldwide," he said. And Shaka Pow believes that with the star power that Beenie Man packs, that is not impossible.

"Beenie Man has always been so willing and flexible to voice with persons like myself and he has committed to working on a music video for this track. He has the network to get the song out there on high levels and he is happily pushing promotion. His willingness makes it clear why he is to so many the king of dancehall," he said. "The song is out and doing really well. We're already getting a lot of love from listeners and every day the promotion organically increases."