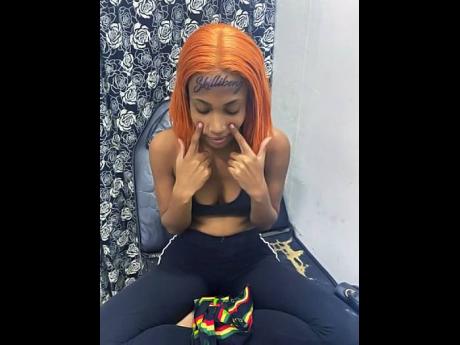 Honey Milan showing off what appears to be a real tattoo with the word ‘Skillibeng’.

Fast-raising dancehall artiste Honey Milan has social media abuzz after getting what appears to be a 'Skillibeng' tattoo on her forehead.

Her actions have served as confirmation for persons who were questioning the extent of the relationship between the two artistes. But in an interview with THE WEEKEND STAR, Honey Milan said "The relationship is very organic. We're both artistes, him nuh love nutten more than music and me nuh love nutten more than music. So that alone is chemistry."

"He and I were living together, he introduced me to his mother," she continued. But as for the tattoo, she said "People online think I don't show my gratitude, everybody close to me good, cause there's not much to explain about it," she said. "Except that, yes, it is real."

She admitted that, in the moment, she did not really think about her tattoo or the influence it would have on her brand.

"Me just go do it. For the people that are saying it's a publicity stunt, I would like to say to them, 'good day to you' and those who stare, I am just going to stare back," she said. "My fans who know me or love me, dem nah say nutten 'bout the tattoo, it's the outsiders. The people weh upset ah nuh fans, my fans know me do weh me waan do and that I don't care. They already know what time it is."

Though not meant to promote any upcoming project, the artiste says persons can expect her to release new music which speaks about the choices she has made in recent weeks. For instance, she made her Instagram page private after sharing her tattoo experience. "I have a track coming titled Change Status which shares everything," she said.

Honey Milan's management and marketing team did not confirm or deny that the tattoo was permanent. They also said that there are no present concerns that it will affect her chances to receive signing deals or endorsements as an ambassador.

Popular artiste manager Shelly-Ann Curran, known for her expertise in public relations, said that she didn't see the tattoo impacting her career in any way, "if it is real".

"The only thing I would advise is to be prepared to pay the tattoo artiste to cover it because nothing in work or personal relationship, or life for that matter, is guaranteed. So, she must mek sure she have up her money, in the event things change," Curran said.