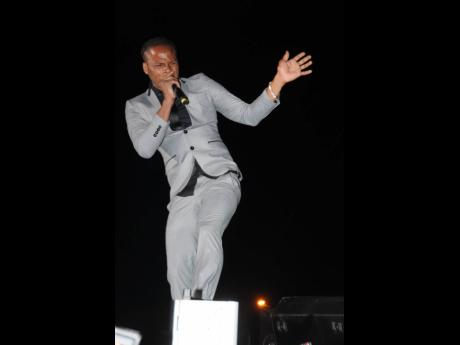 The promoters of a concert in New York City, which featured dancehall artiste Dexta Daps as the headline act, are today coming under heavy fire, after pictures and videos from the event surfaced showing a jam-packed venue.

The public has been expressing disgust on social media and branded the promoters as careless for hosting such a huge event in the midst of a pandemic.

In the photos and videos now going viral, 'mask-less' patrons can be seen disobeying the six-feet-apart social-distancing guideline for public gatherings. Under New York state's COVID-19 guidelines, outdoor entertainment-related activities are also only allowed to take place at 33 per cent of the venue's total capacity. But despite the pictures, promoter Steelie Bashment insists his team did everything "by the books". He told THE STAR that he believes the turnout was within the required limits.

"I couldn't say how many persons were there but I know it was at the number that the venue required," he said. "You ever heard of a thing called camera trick? Sometimes things appear to be more than what you expect. In this aspect, people use their cameras to showcase that the venue is more than what it is. I wouldn't say it was overcrowded. I don't know what is being portrayed in the pictures but I was there and I wouldn't say it was overcrowded."

He continued, "We did everything by the books. We had the sanitisers, the masks, everything. We were promoting social distancing even on the mics. We kept telling the patrons to keep to the friends you know, the family members you know. We kept promoting that all night." He said that the onus was on the patrons to ensure they obeyed all the rules.

"We are responsible for our actions but we can't be responsible for nobody else's. I don't have control over who decides to wear their masks or who doesn't. My concern was to make sure we promote social distancing and promoting that mask is a must," he said. "If you're doing any type of event and you distribute the masks and people come inside the venue and decide not to put on the mask, who is at fault?"

Steelie Bashment also said that, as a sign that his event was in compliance with the guidelines, the concert was allowed to go on until the stipulated cut-off time. He reasoned that had his team violated any rules, the event would have been shut down.

Steelie Bashment, who had been promoting the event for weeks on his official Instagram page, said the picture being painted is not a true reflection of what happened.

"Pictures paint a different picture, as we all know, and so everyone is living by assumptions based off what they see, but we're having a conversation about what was put in place and what we did to ensure the safety of our patrons," he said. "Those stories are just stories and there's always two sides to every story. I'm telling the story now to explain the picture. Now you're hearing it from me who was actually there." He said that everybody is entitled to their opinion, "so we let people talk".

"The ones who attended were feeling comfortable in that environment. They enjoyed themselves," he said.