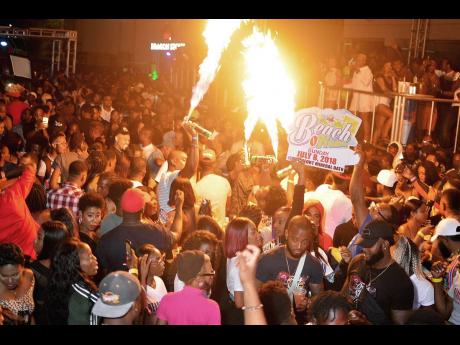 Patrons react to music at a fiery edition of Ratingz held last year.

Following news that permits would no longer be granted for the staging of entertainment events to be held in New Kingston parking lots owned and operated by the Kingston and St Andrew Municipal Corporation (KSAMC), promoters of several events usually held in those areas are upset.

The promoters told THE WEEKEND STAR that they were not notified about the KSAMC's decision and are now left to scope out new locations in an already limited pool of entertainment spaces.

Tarik Scott of Yung Rolaz, whose event, Ratingz, is usually held at the Triple Century car park, says the venue has become a "home ground" for the party.

The next installation of the event was scheduled to take place in a few months. Scott says he has now been put in an uncomfortable position, as he has a limited amount of time to find a new venue.

"Our crowd is usually the only crowd that fills up that venue. Our patrons are used to it being held there and we've grown into the space over the years. Now we have to go back to the drawing board to find a suitable spot that can facilitate all our patrons, in a central location and has adequate parking," he said. "To this date, nobody has said anything to us.

We basically found out via screenshot sent to our (WhatsApp) group by one of our members. There was no formal notification to say well then, this is what's going to happen and this is when it will happen. To me, that was not a good look on their (the KSAMC's) part. We have paid so much money securing permits and so on, we deserve to have had someone send out some form of communication advising us of their decision."

Michael Morrison, promoter of the party My Scheme, set for the St Lucia car park tomorrow, said that having gone through the proper channels to secure his permit, he was disappointed by the lack of communication.

"Everything was set for this Saturday. I picked up the permit last week, so this came as a shock to us. The same way everybody found out is how we found out, via WhatsApp. A fellow promoter sent it to me and said I should look into it. I was not notified prior to that," he said.

He added that although he was not given any notice, he will be allowed to host his event as planned.

"The town clerk was the one who put out the notice and so we had dialogue with him. I can't bash them too much because they did their research and realised I was granted a permit to have my event there on Saturday. We were then given a waiver to go ahead with our event."

Both promoters say that while they have no idea what could have prompted the decision, they believe it has to do with complaints from residents who live in the area.

According to them, rumours also indicate that some promoters have not been cleaning up after themselves when they use the lots and that has made it difficult for everyone else as the authorities clamp down.

The promoters say they are willing to have a sit down with the KSAMC to come up with a solution that will benefit all parties, residents, promoters and the authorities.

"Even though their decision took effect yesterday (Wednesday), it's better to have the meeting late than not to have it at all. We need answers. We want to find out if this decision is temporary. We can't just hear 'this is what is going to happen' and blam, it just stop right there so," said Scott.