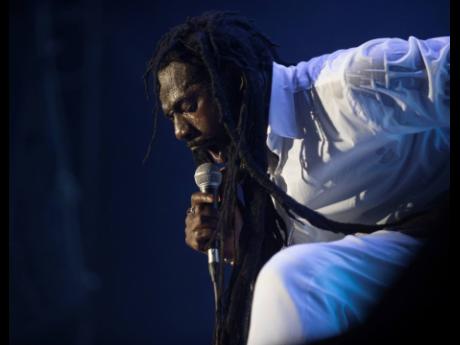 Buju Banton has long distanced himself from the controversial song Boom Bye Bye, but it seems the artiste is still facing repercussions from the track's messages.

Buju has not performed Boom Bye Bye since 2007, when he signed the Reggae Compassionate Act. The act was drafted in 2007 as part of the Stop Murder Music campaign, a human-rights groups coalition, which advocates for lesbians, gays, bisexuals and trans-identified persons.

But Buju's signature on that document does not seem enough for members of the LGBT community, who have staged several protests in different countries since he was released from prison last December. They have demanded that Buju give a personal statement denouncing the song before he is allowed to perform in their countries.

A statement now making the rounds on social media over the past few days shows the Gargamel echoing his 2007 stance, and assuring persons in the countries in which he's been booked to perform that he has distanced himself from the views expressed in Boom Bye Bye.

"I recognise that the song has caused much pain to listeners, as well as to my fans, my family and myself. After all the adversity we've been through, I am determined to put this song in the past and continue moving forward as an artiste and as a man," a part of the statement read. "I affirm once and for all that everyone has the right to live as they so choose ... I welcome everyone to my shows in a spirit of peace and love. Please come join me in that same spirit."

Some social media users have expressed disappointment at the Gargamel's stance, stating that he has crumbled under the pressure from the LGBT community.

However, in an interview with THE STAR, the artiste's publicist, Ronnie Tomlinson, expressed that though the statement was new, the stance was similar to that of 2007.

"So we don't want it to seem as if he was pressured or that people were saying he cannot be on shows if he doesn't give a statement. We realised that there were some concerns and so we just decided to say it again," she said. "We saw different people just popping up with the Boom Bye Bye song again. Whether it was Barbados, Trinidad, Germany, little fires of persons started forming and the concerns started coming again. Everyone's concern was that he was not going to sing this song. We know he hasn't performed the song since 2007, but we realised that was 12 years ago and so maybe others didn't know."

Tomlinson also explained that the Buju that sang Boom Bye Bye years ago, has matured and evolved, and is now a man who believes 'to each his own'.

"It's a man who has seen life, who has gone through so much that is making this statement, a man who is saying 'hear wah, to each man their own'. I think many of us have now come to that term now where we're saying you live your life and I'll live mine," she said. "His music is about love, his legacy is about love, that's what he wants to be remembered by."