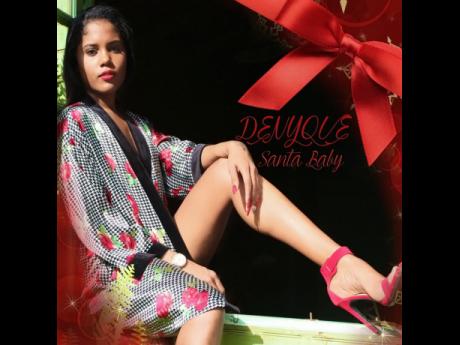 The ever-alluring Denyque Dontre has released a sexy new reggae version of an old Christmas classic that should certainly spice up the airwaves and parties for the holiday season.

DJ Bambino on Monday debuted the singer's single, Santa Baby, the latest remake of a classic first made famous by sex kitten Eartha Kitt way back in 1953.

Denyque, who is known for songs such as Super Girl, How to Rave and Make Me Believe You, said Santa Baby was a song she always wanted to do.

"I wanted to do a Christmas carol this year because I love Christmas so much, and I decided to record Santa Baby because it's one of my all-time favourites. There have been a lot of do-overs; Taylor Swift did a cover and Arianna Grande did a cover," she said, adding that she wanted to add some Jamaican spice to it."I decided to do a reggae remix that was produced by some of the greatest musicians in Jamaica.

I mean, (saxophonist) Dean Frazer is all over it," she said of the song that the singer and her manager, Jade Lee, are executive producers for. "We decided to do this project because it was necessary for me. It was something I had always wanted to do."

Denyque also revealed that a video for the song is coming by December. It will most likely be shot by Icey Jace. The video, she said, will be dripping with the raunchy sex appeal that Eartha Kitt first brought to the song more than 60 years ago.

Expect the sexy singer to be performing the song during performances leading up to and during the Yuletide season, as she channels the sultry Kitt and some of the other famous singers who have covered the song throughout the years, including Madonna, Macy Gray, the Pussycat Dolls, Shakira, and LeAnn Rimes.