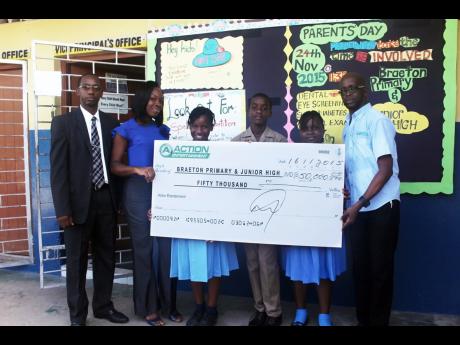 Edwards participated in devotions at the school before handing over a $50,000 cheque towards a computer lab from money raised from the staging of Gosplash 2015, which was held at Sugarman's Beach in August.

The event, staged by Edwards' company, Action Entertainment, was sponsored by Credit Unions of Jamaica (CUJ) and featured gospel artiste Papa San, Jodian Pantry, and DJ Nicolas, among other performers.

But while the event fell short of expectations, there was enough for Edwards to fulfill his promise that part of the proceeds would go to his alma mater.

"Though The CUJ Gosplash 2015 was a great production and is poised to be the annual must-attend summer gospel event for Christians and non-Christians, the financial returns were less than anticipated. However, I had to honour my commitment as part proceeds were promised to the school's computer lab," he said.

Orlando Worges, the school's principal, expressed gratitude for the donation. "We are appreciative of this contribution for sure," Worges said. "What we also value is Markland actually taking the time out to be a part of the devotions with the students. He encouraged them to continue the hard work, and as a past student, we are grateful that he remembers us and reached out to assist."

In announcing his commitment towards providing further assistance to the school, Edwards said planning has already begun for Gosplash 2016, which he expects to be even bigger.