There is plenty of good news out there 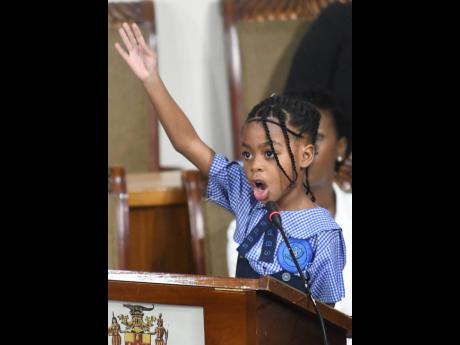 Ngozi Wright is very demonstrative as she addresses a special parliamentary session on violence against children in Gordon House on Tuesday. Wright and the other children who spoke captured the hearts of many Jamaicans with their presentations.

Earlier this week, there was a public forum on whether the news in Jamaica was too negative.

I was unable to attend, but by all reports, the forum, while it may not have adequately addressed some important issues, was a success.

I joined The Gleaner Company on August 2, 1990, and was thrust ­immediately into a side of Jamaica I was ­previously unaware of.

On that day, there was a ­massive shoot-out on Matthews Lane ­between rival gangs and members of the security forces.

My colleague, Warren Wint, wrote the lead stories for THE STAR and The Gleaner on that day that turned out to be my baptism of fire.

For the next few years, I covered violent crime in Jamaica; did an ‘Issues of Concern’ column for The Sunday Gleaner; tracked Natty Morgan; and reported on police ­transgressions, ­deportations, courts, and so on.

Jamaica can be violent, and issues involving government tend to be ­negative, in that those are the things that reporters ­report on.

However, they cannot and should not be the only things that gain ­national attention.

I was told a long time ago that good news does not sell, and that might be true to some degree.

However, that should not ­prevent us from covering ­positive things as well. Positive stories should be part of the ­balance that we bring to the media landscape.

As reporters, we record history, so it is ­important that we get it right. One hundred years from now when historians look back at the archives, you would not be able to blame them for ­believing that Jamaica was a violent and corrupt country.

However, that would only be partially true. There are many good things happening in this country that we journalists do not report on because they are not ‘sexy’ enough for the news.

What we have managed to do over a long ­period is convince people that something has to be negative to be considered news.

What we have also failed to understand is that we are the reason why this has become the case.

If this diet of negative news is what we constantly sell to people, it is the only thing they know.

We have normalised the negative, so our audience has come to expect it from us, and the worse it gets is the more we sell it, until the most egregious of things barely even register anymore.

Greater balance is needed ­because without that balance, society descends into madness; but by then that, too, will have ­become the norm.