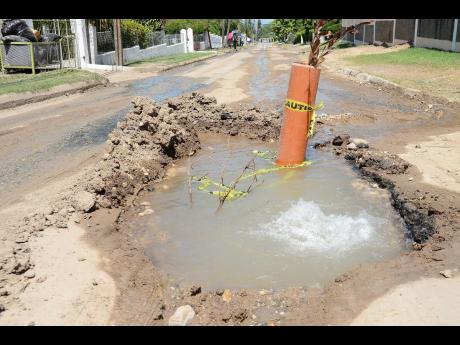 A few months ago, a Pre-Mix truck almost ran over my wife’s car, destroying the back door on the left side.

It has taken a while to get the insurance companies moving on this, so it was only a couple of weeks ago before she was able to give the car out for repairs.

During the period, I took her to work all the way downtown. Notwithstanding the cost for extra fuel, it was nice to have her riding shotgun with me once again, even if it was just for two weeks.

One morning while heading downtown, we noticed that there were several spots along the newly laid roadway that were dug up, presumably by the National Water Commission (NWC).

Let me just explain here that I am not alone in my assumptions, nor are they unjustified.

In my mind, there is a department inside the NWC whose job it is to monitor the roadways in the city and elsewhere. The minute something new is laid, they get to work.

A conversation inside that department would go something like this:

And so, the road is dug up, to the chagrin of motorists who are finally able to find a good strip of road to drive on.

That seems to be the trend, and I am not the only one noticing.

“Do you plan ahead and do the necessary infrastructure ‘upgrades’, before government fix the roads, to ensure that you don’t have to dig them up as soon as they’re fixed?”

NWC was asked the question above by Cornelius St John from his Twitter account this week, and based on the responses he has been getting, there are many who would love to know the answer to this very important question.

I will never understand how it makes sense to construct the roadway, only to dig it up once again to lay or replace pipes. Shouldn’t these agencies be talking to each other so that they are on the same page as to when and where to replace pipelines, especially in areas where construction is taking place?

I mean, how hard can it be?

What is happening, however, is that is just seems like the NWC gets really excited whenever new roads are made, not because they get a chance to have a drive on it, but because they have another opportunity to wreck it once more.