Mayhem on our streets 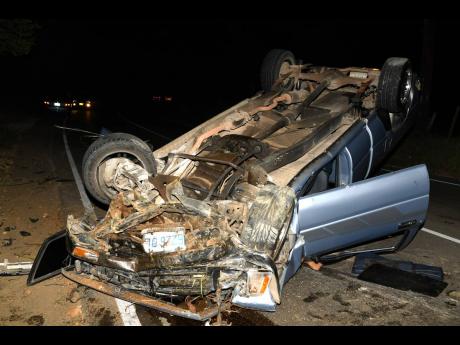 This pick-up crashed in St Elizabeth last year. The driver and two other occupants had to be rushed to hospital.

The Jamaica Constabulary Force has a thankless task of policing a lawless society where anything goes and walking the straight and narrow is scoffed at.

Since independence, our behaviour has progressively got worse and has forced nations across the globe to impose visa restrictions for their own safety.

Then, during the 1990s, one of our leaders declared that the “law is not a shackle”, and we misinterpreted it to mean what we wanted it to mean. Since then, things have been pretty much off the rails.

Murders have become commonplace and we average one road death a day, motor vehicle mishaps caused by reckless driving, as well as reckless driving with defective vehicles.

We expect our police force to navigate this environment and somehow bring things back under control, especially when it comes to the traffic on the streets.

I often see police, traffic police, lurking on some backstreet corners, ticket books in hand, waiting to prosecute some poor soul who did not use his indicator or come to a full stop at an intersection. While this is happening, not far away are taxi operators literally driving at full speed between the lanes of traffic on a main thoroughfare.

They are putting the lives of pedestrians and motorists alike at risk, while the police are on a quiet corner waiting for transgressions that are happening in abundance not far away.

I do not know who deploys these teams of police officers and who decides where they should set up each day, but I would believe that a rethink is in order.

Meanwhile, there are so many accident hotspots along our highways and main roads, highlighted by billboards. However, you never ever see police officers stationed in these areas.

The signs are there, yes, but people do not read. I am sure that if you ask people where along Washington Boulevard has been labelled an accident hotspot, nobody can tell you. Yet, a sign is there. However, you never see a police officer or vehicle there.

If we are to get a handle on the mayhem on our streets and highways, a more pragmatic approach is needed. Sure, it is nice to hand out dozens of tickets on a daily basis on some nondescript intersections across the city, but I do believe it is far more important to save lives.