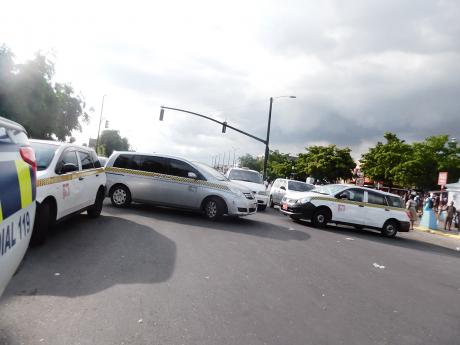 Taxi drivers block a section of North Parade on Tuesday during their protest.

Jamaica is not a real place.The clichÈ has been bandied about in recent times, and it could not have come at a better time.

For the past few days, taxi drivers have been protesting what they believe to be draconian new traffic laws that will see them facing much harsher penalties if they break the law.

When I first heard, I had to check because it seemed unreal to me that someone would protest penalties that only apply if you break the rules.

This could only happen in Jamaica, which has got to be one of the most undisciplined countries on the planet.

One of the key changes with which they have an issue is that the owners of cabs will be held accountable for the breaches of those cabs' drivers.

I laugh when I hear this because it is yet another case of no one wanting to be held accountable.

Does anyone realise how easy the flow of traffic has been during the protests, well, except in those instances when the drivers blocked sections of the road?

Cab drivers break every rule in the book, and they create traffic jams everywhere because they create congestion and confusion wherever they go.

Take the situation on Caledonia in Cross Roads, where a bay was created for cabs to park and pick up passengers.

Despite the bay being there, cabs literally litter the street, blocking the post office and creating gridlock for regular motorists going about their business.

In Half-Way Tree, there is another area designated for cab drivers, yet they used to park in the extreme left lane along Constant Spring Road in front of Jamaica National, forcing motorists to scoot out into the right lane in order to turn.

When the cabbies are not blocking the road, they are driving like madmen, putting the lives of passengers, motorists, and pedestrians at risk.

Yes, I understand that the drivers and owners have to make a living, but it cannot be at the expense of everyone else.

I agree that there need to be infrastructural improvements along our main thoroughfares that accommodate cabs stopping to pick up and unload passengers.

But based on what we have seen, cab drivers don't play by any rules.

They now need to. The new laws must be passed and enforced. Most law-abiding Jamaicans would like to enjoy our driving.

We would like not having to worry about taxis cutting in and out of traffic, stopping in the middle of the road, and creating chaos wherever they go.