Laws are useless without enforcement 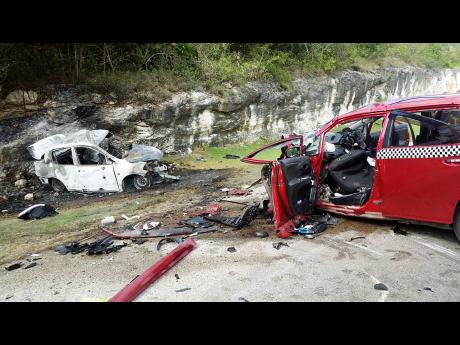 The remains of the two vehicles involved in a fiery crash along the North Coast Highway in the vicinity of the Duncans bypass in April. Three people lost their lives in the crash.

The new Road Traffic Act 2018 made passage in Parliament on Tuesday and should soon become reality with about 160 amendments that will include new violations and stricter penalties. Hooray!

In my lifetime, I have seen this scenario many times. We have enough laws in this country to govern a dozen nations, but Jamaica is not one of them. You see, to me, laws are just words on a page unless they are enforced.

I welcome the amendments and the new penalties because we are an undisciplined people, and we prefer to have big sticks hanging over our heads because our indiscipline stems from a lack of self-discipline.

Each year, more than 300 Jamaicans die on the roads, and notwithstanding some exceptions, most could be avoided.

Many more were avoided by sheer luck. Just recently, I was turning into my apartment complex. I had my indicator on because the entrance was on the opposite side of the road. The cars immediately behind slowed and stopped. I began to turn when a white car cut outside all the others and rushed towards me. He clearly did not see me, and if I had not seen him, I might not have been able to write this column today.

The thing is, there was nowhere to go because there was a line of traffic just in front of me, the driver almost took my life, he had to hit his brakes immediately after passing, missing me by mere inches.

On another occasion, not too long ago, I was turning on to a road (I can't remember the name) from off West Avenue while taking my son to school one morning, when, on entering the road, I came face to face with a taxi heading towards me at top speed.

It was overtaking a long line of traffic waiting to turn on to West Avenue. Thank God he had good brakes, or else things could have been very bad for the driver, my son, and me.

I say all this to suggest that along with the new Road Traffic Act, there should be an accompaniment of police officers or traffic wardens at strategic points across the country, especially along routes where there is an abundance of taxis and public-passenger vehicles.

It is either that, or there should be a mandatory call for specialised training for drivers of public-passenger vehicles, all of whom seem to have attended to the same school of suicidal driving. For the other drivers, maybe sessions in patience and controlling road rage are in order.

Too many people are dying needlessly because of undisciplined driving, and laws on the books will not change anything unless there is a strong element of enforcement to go along with them.