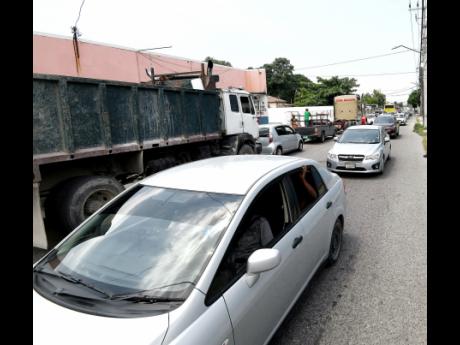 You know, shutting down the main arteries of transportation in Kingston at the same time was never going to be a good idea, especially when there was not a real plan on how to manage the near 100,000 cars that use those roadways every day.

I, like most practical Jamaicans, see the improvements as a good thing. Constant Spring Road was a mess most times because the road surface was so poor.

I hated driving on it, especially in peak traffic. Similarly, Three Miles, while admittedly easier to traverse after they took out the roundabout, was still tricky.

Moreover, what made it worse was the street 'men' who are always trying to clean your windscreen and who bullied female drivers; they were like vultures just waiting for the light to turn red.

The flyovers will sort out that problem, but until then, it is fair to say the city is a mess. It takes hours to get anywhere and productivity will most definitely suffer over the next year, when we hope these projects will be completed.

So while the prime minister, the National Works Agency, the police and China Harbour work to find solutions, to the mess the shutdown of these roadways are causing, we as users of the road can find our own solutions, too.

The only trouble is, do we have the will to stop complaining and start looking at solutions?

One immediate solution, and it is something that I have mentioned long before this situation arose, is carpooling.

An estimated 70,000 cars, they say, pass through the Three Miles area each day. What if we could reduce that number to 50,000 cars?

I believe it would make a world of difference in easing the congestion that motorists are currently experiencing.

Therefore, if you are living in the same community as someone who works close to where you work, he or she could travel with you on a particular day, and they would return the favour the next day, and so on.

Maybe people could form groups based on destinations. Therefore, if your kids attend the same schools or their schools are nearby, parents can take turns dropping them off each week.

That way, everyone saves gas and there would be fewer cars travelling those routes each day.

So instead of six or seven cars taking kids to school, it could be two or three.

It would certainly cause less congestion and less gas for each car owner, and maybe you could all get to know each other and become real communities once more, not just a bunch of strangers who live close to each other.

It really could be an opportunity to face a crisis together and come closer as a result.