Jamaica needs to prepare for earthquakes 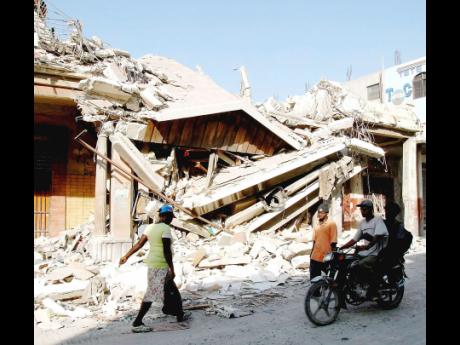 The aftermath of the 2010 earthquake in Haiti.

Trinidad and Tobago, Grenada, and Venezuela experienced a massive earthquake this week, and this should be a warning to us here in Jamaica about the possible impacts should we suffer a similar fate in the near future.

According to some seismologists, Jamaica is due another big one. The last massive quake hit us in 1907, and the damage was significant. That was more than 100 years ago, which means that no Jamaican alive today really knows what it feels like to experience a massive earthquake. But there is no time like the present to open their eyes.

There is a large number of Jamaicans who did not know that there was a massive earthquake in the Caribbean this week. We need to wake up and know what goes on around us so that we can be aware of what we need to do in the event of similar things happening here.

In the aftermath of the earthquake, a colleague of mine posted a quite chilling reality on Twitter yesterday. He said that should Jamaica get hit by a magnitude 7.0 earthquake, among those structures most likely to be significantly impacted are the centuries, old prisons.

The implications of that reality are terrifying.

We should also be concerned about the potential heavy loss of life, considering the number of buildings that have gone up during the past few decades that have not met basic construction standards because of corruption and lax monitoring.

In terms of public education, I believe that the Office of Disaster Preparedness and Emergency Management (ODPEM) should be given the resources to start a massive public-education campaign that should primarily target people living in some of the country's poorest communities, which would be most vulnerable in the event of an earthquake.

And, of course, there is a need to work out distribution systems that would enable the authorities to quickly funnel resources, food and water to the most vulnerable and to those who are in immediate need.

Thankfully, there have not been any reports of deaths in T&T and Grenada, and we haven't heard much coming out of Venezuela yet. But we should not ignore the possibility of casualties, should it happen here. To be forewarned is to be forearmed. Let us get moving to protect ourselves.