Silent on murders, vocal about gays 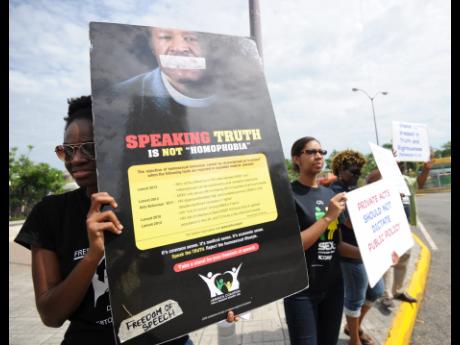 Ricardo Makyn/Staff Photographer Members of the Love March Movement having a peaceful demonstration adjacent to the Pegasus Hotel on Knutsford Boulevard to let their voice's be heard earlier this year. 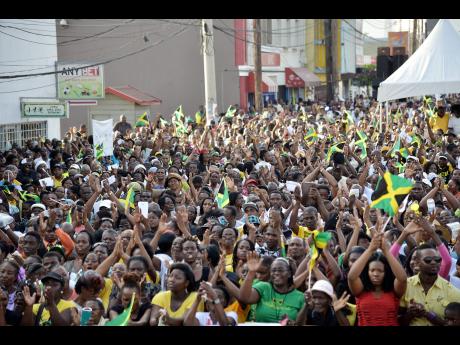 File Christians attended a July 2014 rally in Half-Way Tree, St Andrew, organised by Christian group, Jamaica Churches Action Uniting Society for Emancipation, in protest against what it considered a growing threat to freedom of speech.
1
2

I believe it was last summer that thousands of Jamaicans, led by church groups, gathered in Half-Way Tree protesting and threatening government about the curse that would descend upon us should they repeal the anti-buggery law.

The placard-bearing mob unleashed their rage for all to see against the homosexual scourge that they believe has made Jamaica such a horrible place to be.

Fast forward more than a year and a thousand murders later when within weeks a man and his one-year-old son were gunned down by criminals, two sisters were raped and murdered in Clarendon and, as I woke early yesterday to write this, I see a story about a medical student of the University of Technology (UTech) being gunned down by criminals, who wanted to take her handbag on Hope Boulevard the night before.

In short, things are bad and seemingly getting worse. As it stands, the surge in crime is posing a serious threat to this country, but you don't have to take my word for it.

"We have to be realistic; we have to know that without a safe, stable and secure environment, we are going to have trouble getting even more investments, so we have to not ignore security," said US Ambassador to Jamaica Luis G Moreno early last month. "Crime, especially violent crime, is a deterrent to both local and foreign investments and for this reason, the US/Jamaica partnership in law enforcement is vitally important to sustain growth and prosperity in Montego Bay and across Jamaica."

He was addressing an audience at the Montego Bay Chamber of Commerce and Industry Expo 2015 at the Montego Bay Convention Centre in Rose Hall, St James, the hub of Jamaica's tourism product that is surrounded by some of the most violent communities in the country and where the lottery scam is thriving.

Just recently, six persons were shot dead and their family house burnt in Hanover, a crime believed to be connected to the scam that authorities believe is bigger than the drug trade.

With all this I am yet to see a gathering of the magnitude of the one we saw in Half-Way Tree last year. There was a march earlier in the year, I believe, against the violence against children that hardly generated any interest among the populace. It was almost as if we are saying, we're cool with kids being abused and killed, so long as they are not gay.

There are no words that can adequately express how nauseated I am by all this. There is no day that there are no reports of someone being slaughtered in this country and it's why we have one of the highest murder rates in the world. Yet, the church and their loyal flock won't be congregating anywhere to voice their anger at that.

We haven't even heard a group of church leaders speak openly about the wholesale slaughter of their fellow countrymen and women. The only focus it seems is on gays being afforded basic human rights which they are being denied in Jamaica.

It's as if we truly believe that affording gays their basic human rights will make us even more violent, even more evil than we already are. Or, it could be that the church and its misguided flock, for the noise they make about gays, is simply too afraid to take on the criminal element.

If that is the case, it makes them bullies and hypocrites. Gays are in the minority and can easily be out-shouted and marginalized, but even while the criminals are also in the minority, they carry guns. Apparently all the so-called faith that their God can protect them against all evil is just a show and a poor one at that.